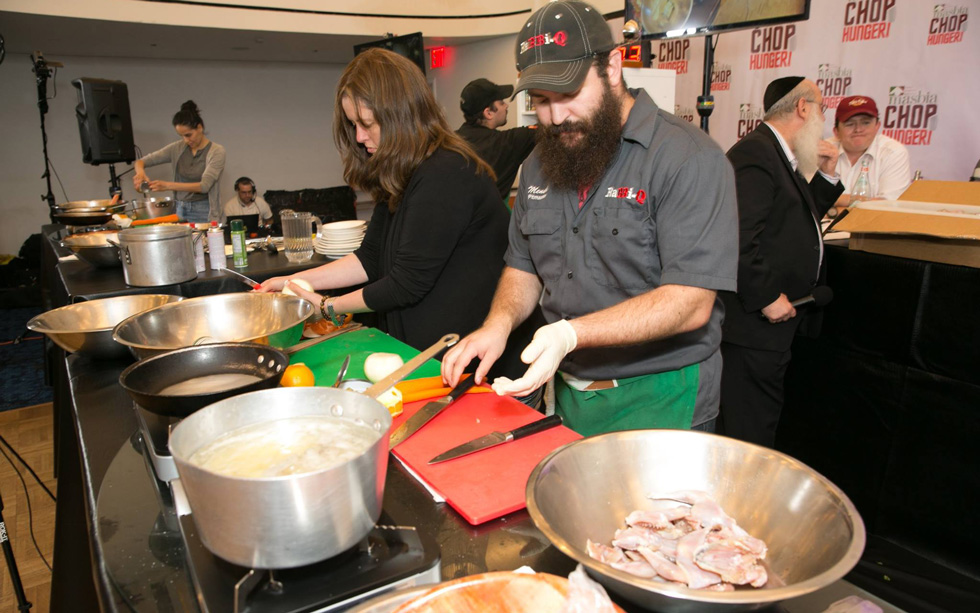 Cook-offs for fun or charity are catching on in the wake of the TV series.

At the recent Chop Hunger event benefiting the Brooklyn-based Masbia soup kitchen network of three restaurants, Rabbi Avi Levy presided over three competing chefs and three judges, all professionals in the food industry. As emcee of a “Chopped” event, Levy’s job was to simultaneously run the competition and keep the event attendees interested and engaged.

The latest trend in Jewish event planning takes a page from the television show “Chopped.” Whether purely for fun or for charity, “Chopped”-style cooking competitions are becoming the main activity. Several Jewish organizations have recently turned to these types of fundraising events instead of traditional galas since they are low-cost, casual, and fun. Families and other individuals are also choosing to mark special occasions with the participatory party activity.

In “Chopped” competitions, several contestants or teams are given a limited amount of time (usually around 30 minutes) to prepare a dish with a mystery basket of ingredients. The basket’s contents will change from affair to affair, perhaps reflecting the season (in autumn they might contain apples or pomegranates, said popular host Naomi Nachman) or having something to do with the hosting organization. The judges score the results on taste, creativity, and presentation.

The details and scenarios of the competitions, however, are fluid. In order to participate in The Great Cholent Challenge that Levy hosted for Masbia last year, the contenders, all men, had to first raise $500 to enter the contest; they were tasked with cooking their best cholent, the meat and bean stew that graces many Ashkenazi Shabbat tables in winter.

At Chop Hunger, held in the basement banquet hall at Lincoln Square Synagogue on the Upper West Side, the contestants were presented with quail, canned green beans, and oatmeal — the latter two, at least, the kind of simple fare you might find in a soup kitchen pantry. Their final dish had to include all three ingredients, evoking a real-life challenge once faced by Masbia’s head chef Ruben Diaz. Fortunately, the chefs had access to a pantry of spices and condiments.

Each emcee brings a different style and skill set to the events. Levy, a Florida-based chef-cum-rabbi, stars in his own YouTube series in which he demonstrates how to cook different kosher dishes. His videos have garnered thousands of views and cover a range of recipes for fish, meats and vegetables.

For Masbia’s Chop Hunger event, Levy interacted with the chefs and judges, in addition to emceeing. Having a background in filmmaking, he also produced short videos that played throughout the evening. He does not bring supplies so as to avoid kashrut preference issues, and Masbia was able to provide its own cooking equipment and tools.

Nachman is a Woodmere, L.I.-based personal chef, radio host and frequent “Chopped”-style event host. In September she emceed The American Friends of Laniado Hospital’s Grand Women’s Cook-Off to benefit a new $10 million birthing center at Laniado Hospital in Netanya, Israel. The cook-off was only open to women and drew a largely Orthodox crowd. She hosted a singles event in Queens for DineNMeet last month. “It was interactive and a great way for new people to meet each other,” Nachman reflected. She proudly mentioned that a few dates were set up afterwards.

For her “Chopped” events, Nachman provides everything that is needed for the mystery baskets, in addition to pots, pans, cooking utensils, and stovetop burners. The event host is also expected to supply refreshments and tables for the guests.

If the event is hosted well, the emcee keeps the audience interested and entertained (including putting in plugs for the benefiting organization) while the competitors cook up their contest entries; the crowd should want to stay until the end to see who will win.

“The whole thing with ‘Chopped,’” Levy said, “is that it provides entertainment and guests contribute to the overall goal of raising funds for an organization and bringing attention to it.”

At one Chopped event benefiting a Young Israel synagogue, Levy switched roles and served as a judge, an experience that made him feel “a little awkward at times.” Levy said that it taught him how to balance being truthful about the dishes prepared for the contest and being diplomatic. “You try to be kind and at the same time you may need to say something awful about someone’s cooking

“It changed how I host ‘Chopped’ events,” he said.

“Chopped” events seem to be increasing in popularity, and not only as fundraising activities. Nachman, who has already hosted “Chopped” birthday parties and synagogue fundraisers, hopes to expand into the corporate realm, hosting cooking events as company team-building activities. Both Nachman and Levy are booked months into the future.

The aspect of elevating kosher food to the mainstream is important to both Nachman and Levy. Nachman, a passionate kosher chef, touts the strides the Jewish food world has made in terms of quality and prestige.

“Professional chefs compete, bring kosher food up to the mainstream foodie environment,” mused Levy. “It shows that we can still be religiously observant and mainstream at the same time.”

Weinstein’s parents, Tzvi and Goldie Bloom of Far Rockaway, only found out about the surprise party that morning, when one of their daughters, who was away studying in Israel, appeared in their kitchen. The Blooms soon learned that she had flown in for a celebration that would be held in their kitchen that evening.

Nachman brought the necessary supplies to her parents’ home later that day, and the party of 12 broke into four teams of three after drawing names from a hat. Weinstein took the party planning seriously: She hired a videographer and ordered custom aprons and cutting boards for her family members to use. Her parents’ reaction? “They were beyond,” she exclaimed.