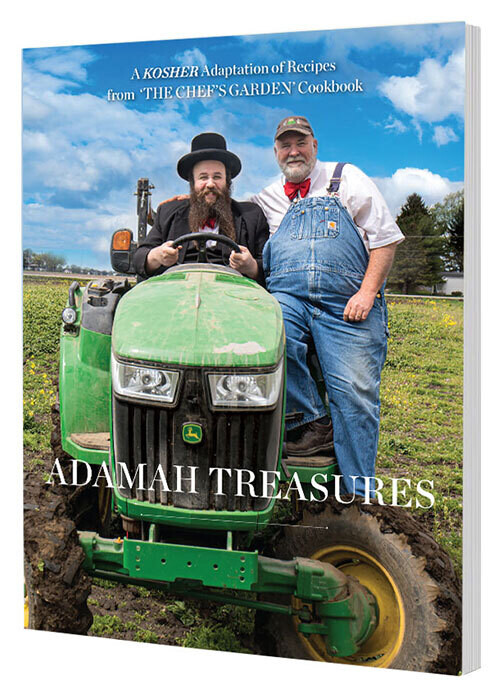 Masbia’s got something special in store for anyone who sponsors two emergency food packages!

You will Receive Masbia’s Kosher Companion to Farmer Lee Jones’ cookbook, Adamah Treasures: A Kosher Adaptation of Recipes from ‘The Chef’s Garden’ Cookbook

Adama Treasures contains the 22 non-kosher recipes from The Chef’s Garden cookbook transformed into recipes that are suitable for kosher kitchens while staying true to the main attraction – THE VEGETABLES!

Working alongside Chef Jamie Simpson, The Chef’s Garden’s chef and recipe creator, Masbia’s COO, Chef Jordana Hirschel, sifted through the ingredients of the entire cookbook. Together, they carefully crafted the best kosher alternatives without compromising on flavor, texture, ingredient compatibility, and overall dish integrity. They didn’t merely substitute dairy creamer with non-dairy creamer, or non-kosher seafood with the fake stuff, but they tuned into the essence of each dish and experimented until each recipe was pitch-perfect.

This project could not have been made possible without the help of Chef Josh Massin of the previous Nobo and current Naruto Bowl restaurants in Teaneck, NJ, Chef Bryan Gryka of Milt's Barbecue for the Perplexed in Chicago, IL.